The New Computer Museum maintains a complete collection of fully functional microcomputer hardware and software. In other words, this is what we DO collect. The first goal of this activity is to simply help educate the public about the history and importance of the microcomputer revolution. The second and far more important goal is to make an extensive, nearly exhaustive collection of microcomputer hardware and software available to the general public for use in teaching high school and college students about computer history as well as for retrieving digital history for both individuals and organizations.

Related sites
The Story of the Intel® 4004 (Intel)
The Birth of the Microprocessor: Intel 4004 (Michael J. Miller, PC Magazine)

The 8008 was the precursor to the Intel 8080 that was introduced in 1974 and used in the MITS Altair 8800 computer that set off the personal computer revolution.


The New Computer Museum has a copy of this famous January 1975 Popular Electronics with the Altair 8800 computer featured on the cover. It is on display in the virtual museum and will be displayed in the physical museum if / when there is one.

Related sites
More about the 6502 cpu YouTube Channel…
6502.org: Technical resource for hobbyists and engineers working with the 6502 (Mike Naberezny)
Visual Transistor-level Simulation of the 6502 CPU and other chips!
Swaminathan, N. (2011, July/August). Digging into Technology’s Past. Archaeology, 64 (4).
MOS Technology 6502 (Wikipedia)

The first programming language for the Altair was Microsoft’s founding product, Altair BASIC. The popularity of Altair BASIC, often not purchased legally, is what prompted Bill Gates to write this famous letter that is in the New Computer Museum’s collection. 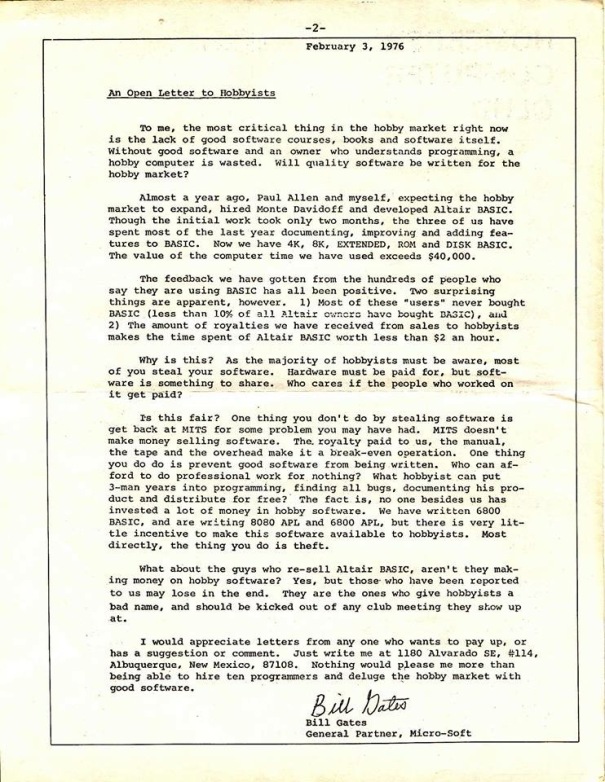 Here is a video that explains how it all happened straight from Bill Gates himself!

Bill Gates and the Girl Scouts 1995 Michael Garboski at The Computer Museum, Boston

Hiawatha Bray was kind enough to include an archival copy of a photograph from this event when he wrote about the New Computer Museum for the Boston Globe in 2013.
A passion to preserve the digital past (Hiawatha Bray, Boston Globe, August 31, 2013)

Here is a video of a child using one of the New Computer Museum’s Apple IIe’s with a rare TI-99 Sprite board running TI-99 Sprite Logo.

Here is a wonderful Apple II emulator that has come in handy for the New Computer Museum’s virtual edition.
Apple II js – An Apple 2 Emulator in JavaScript

VisiCalc, the first spreadsheet, was developed in a 6502 assembler running on the Multics time sharing system and was released for the Apple II in 1979. It turned out to be a “killer app” that helped to kick off the microcomputer revolution. The New Computer Museum will maintain running copies of Visicalc and it’s many children. 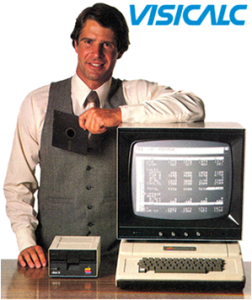 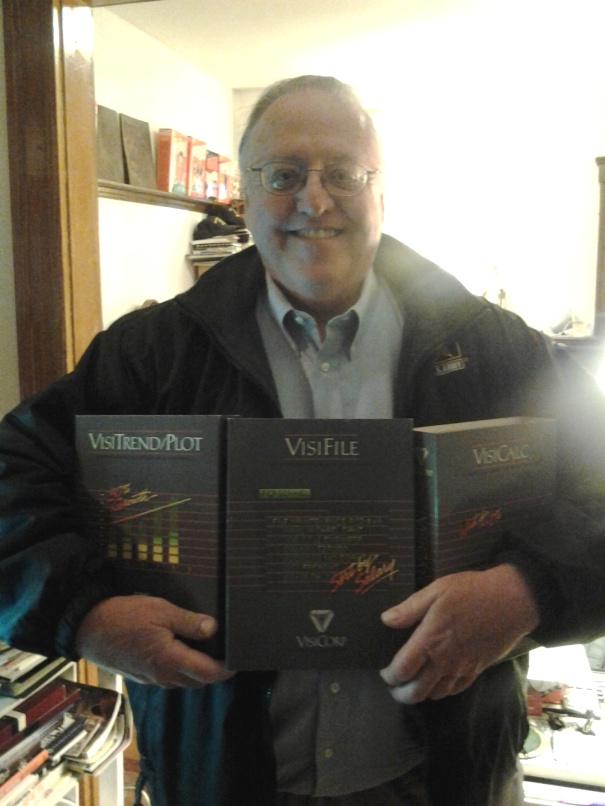 The Texas Instruments TI-99/4A was a neat little computer that was never really given a chance. It came out somewhere around the same time as the Commodore VIC-20. It originally cost quite a bit, but the price soon fell to the level of competing 8-bits. Most of its software ran from cartridges, called Command Modules. It was the first small personal computer to have a 16-bit processor. It also had a radical silver and black case. And, for awhile, also included a Speech Synth module that sounded remarkably good. — T. Carlson, Obsolete Computer Museum

Robert Lawler has loaned a number of key Logo related systems to the New Computer Museum, and a functioning TI-99/4A with expansion module is among them. In this picture he is proudly showing off a functioning TI-99/4A running TI Logo. That same day he also dropped of a functioning Apple IIe along with the TI-99 Sprite boards that make it possible to run Sprite Logo and a Toshiba Home Computer HX 21 that runs a version of Japanese Logo.

One of our supporters once asked “where’s your Kapro”… so far we have the brochure. We are still working on getting the real, functioning system for our very own 🙂

In the meantime, there are other sites that still remember them, too…

One of the primary goals of the New Computer Museum’s physical space would be to provide a public lab and library for use by non-profit organizations, educators, artists and others. It would be modeled on Harvard’s Libraries and Archives approach, but the facilities and services would be available to anyone with a non-commercial need.

The New Computer Museum already has a solid start on this. The collection has over a hundred computers covering most major brands along with peripherals. To give a sense of the breadth, there are one or more of each of the following computers, and there are many other more recent Mac and PC computers and laptops not on this list.

There is a software library with all of the necessary operating system, utility and productivity software needed to retrieve almost any data created since the Apple II. There is also an extensive collection of documentation, magazines and books about computer history.

You can learn a lot more about the sources and evolution of the collection by checking out the far more extensive New Computer Museum History.

This is a very important part of the New Computer Museum’s mission, so there is an entire page in this guide devoted to the Public Lab.