Computers are a relatively new phenomena in the world, so of course, computer museums are even newer. One goal of the New Computer Museum is to communicate and celebrate the history and development of other computer museums.

The Computer Museum was founded by Ken Olsen and Gordon and Gwen Bell in 1975. The first exhibit was in a converted closet at Digital Equipment Corporation (DEC). In 1979 it officially became an exhibition site operated by DEC in Marlboro, MA. It opened to the public in 1984 when the museum was moved to downtown Boston. In 1998, the museum was relocated to Silicon Valley and has been reborn as the current Computer History Museum in Mountain View, California. (Gordon Bell, The Computer Museum Web Site)

This video from when the Computer Chronicles toured The Computer Museum while it was in Marlboro, MA in 1983, and it does a wonderful job of introducing some of the key history that will be covered in more depth in this guide.

Here is a two part video on YouTube of a lecture by Gordon Bell that provides an overview of the history covered in the series.

Here is an extremely helpful image from Gordon Bell that shows the relationships among the earliest computers discussed in the series, and it is also hanging in the New Computer Museum. It originally appeared in the booklet authored by Gordon Bell entitled Computer Generations that was published by the Digital Equipment Corporation Museum Project in 1975.

NSF Computer Tree Graphic, Bell Additions (Click to see the picture and use built-in tools to magnify it.)

Be sure to check out Pioneers Posters and Videos page on this site to see all of the lectures and learn all about the early history of computers!

Information about many of The Computer Museum’s exhibits is still available online!

Of course, one of the most well remembered and beloved is the Walk-Through Computer! 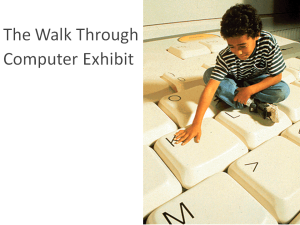 Journey Through the Walk-Through Computer, Hosted by David Neil 1990

The “Tinker Toy Computer” was another very popular and memorable exhibit!

One goal of the New Computer Museum is to highlight the work of local collectors and hobbyists who are actively engaged in doing the types of preservation work that must be done now if it is to be done at all.

The New Computer Museum, in both the virtual form it is taking now as well as whatever past or future real life physical form it might take, seeks to celebrate what other private collectors and small museums do as well as model what they might become. As you review the 3D experience and this online guide, please note that there is a special focus on supporting local collectors and hobbyists through exhibiting their work, collaborating with them on standing exhibits and providing space for them to meet, work and store their collections (within limits, of course! 😉 ).

Another goal of the New Computer Museum’s physical space would be to provide a public lab and library for use by non-profit organizations, educators, artists and others. It would be modeled on Harvard’s Libraries and Archives approach, but the facilities and services would be available to anyone with a non-commercial need.

The New Computer Museum already has a solid start on this. The collection includes over a hundred computers covering most major brands along with key peripherals such as drives and printers. There is a software library with all of the necessary operating system, utility and productivity software needed to retrieve almost any data created since the Apple II. There is also an extensive collection of documentation, magazines and books about computer history.

You can learn a lot more about the sources and evolution of the collection by checking out the far more extensive New Computer Museum History.

This is a very important part of the New Computer Museum’s mission, so there is an entire page in this guide devoted to the Public Lab.