I had a major dilemma back in the winter of 2012/2013 when I started to think about making my computer hardware and software collection publicly accessible — where to do it? I definitely didn’t want to invite the general public into my home, so I started to look into renting. I quickly found out that things had changed a lot since the days when I had my computer business in Harvard Square (Studio-E, 1994-1997). The commercial rents in Cambridge have become absolutely mind-blowing — they are literally some of the highest in the world. There was no way I could rationalize paying so much for such a tiny, non-profit mission of making some old computers available to the public for free.

Then one day I was walking by Metropolitan Storage. It was a place that had become near and dear to my heart over the years as I had turned to them again and again for stashing my stuff — I had come to think of them as one gigantic, practically boundless “room of requirement.” My ever expanding collection of computing history had made its way there more than once over the 20 years since I had my business. I had an “aha moment,” walked in and struck a deal. The folks at Metropolitan Storage were absolutely fabulous about helping me get set up. They even painted and wired a space right inside the main door, and they were happy to guide anyone who came looking for me to my new space that I decided to dub “Digital Den.” 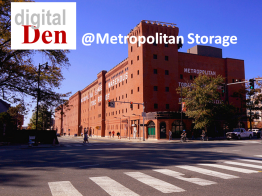 One of my visitors included Hiawatha Bray from the Boston Globe who wrote this article about my new adventure that debuted on the front page of the business section of a Sunday edition. Hiawatha even included a picture of Bill Gates visiting the old computer museum in Boston!
A passion to preserve the digital past (Hiawatha Bray, Boston Globe, August 31, 2013)

The Globe also sent a reporter to shoot a video to go with the story, and the video does a great job of showing the space that the team at Metropolitan Storage custom built for me.
Cambridge museum aims to preserve digital history (Boston Globe Video)

I eventually learned that I was not alone in my quirky choice — I had other neighbors that had also found some interesting, non-traditional uses for their self-storage units. My favorite co-inhabitant was a woman who had worked with the team at Metropolitan Storage to construct a fantasy closet to house her massive collection of clothes. There was also another unit right next door to mine that had a really fantastic, huge custom built study.

Over time I decided that I wasn’t getting enough traffic from the public to rationalize the expense, so I decided to evolve to a “pop-up” model. It made me sad, but I moved my collection back home and let go of my space. I figured I might get another space someday, maybe shift my clothes there instead of computers next time, and go for a closet space, too …

Alas, that isn’t going to happen after all. Early on in my adventure I learned that MIT had actually bought Metropolitan Storage’s property years ago, and so they could choose to use it for something else someday. Sadly, I learned over the summer that MIT has decided to do just that. Many of us in Cambridge have been talking about it for months — where in the world is all that stuff going to go? What are they going to find in those rooms? A dorm, really? How are they going to do that!?! But most of all, what are all of us Cantabrigians going to do without our wonderful, perennial “rooms of requirement?”

Then last weekend the Boston Globe ran a story about the closing, and they included a video capturing the beautiful custom spaces my former neighbors are giving up. It is a bitter-sweet tribute to what is being lost, and it is also sad that only now is everyone seeing the wonderful things that the team at Metropolitan Storage had been doing for its tenants over the years.
A housing boom claims warehouse full of home trappings (Tim Logan, Boston Globe)

Be sure to check out the story and the video. It really is a tribute to an irreplaceable institution that is going to be sorely missed! So long Metropolitan!