Supercomputing is all about pushing out the leading edge of computer speed and performance. The sports metaphors that arise as research sites compete to create the fastest supercomputer sometimes obscure the goal of crunching numbers that had previously been uncrunchable — thereby providing information that had previously been inaccessible. Supercomputers have been used for weather forecasting, fluid dynamics (such as modeling air flow around airplanes or automobiles) and simulations of nuclear explosions — applications with vast numbers of variables and equations that have to be solved or integrated numerically through an almost incomprehensible number of steps, or probabilistically by Monte Carlo sampling. — A brief history of supercomputers (Jan Matlis, Computerworld) 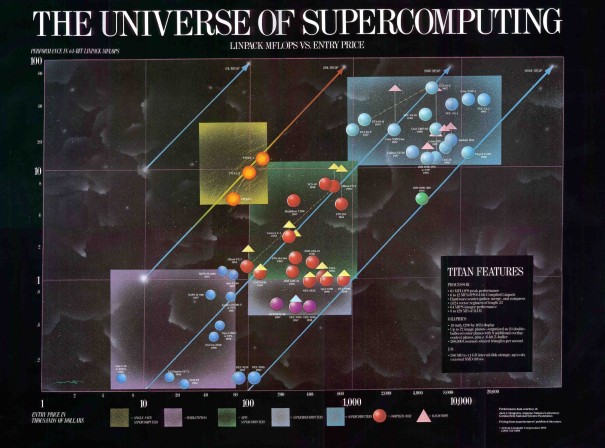 IBM’s Blue Gene/L at Lawrence Livermore National Laboratory has 131,072 microprocessors and was clocked at 135.3 trillion floating-point operations per second (TFLOPS). The computer at Livermore will be used for nuclear weapons simulations. The Blue Gene family will also be used for biochemical applications, reflecting shifts in scientific focus, making intricate calculations to simulate protein folding specified by genetic codes. — A brief history of supercomputers (Jan Matlis, Computerworld)

A Brief History of Supercomputing: “the Crays”, Clusters and Beowulfs, Centers. What Next? (Gordon Bell, Microsoft Research)

Thinking Machines Corporation was a supercomputer manufacturer founded in Waltham, Massachusetts, in 1983 by W. Daniel “Danny” Hillis and Sheryl Handler to turn Hillis’s doctoral work at MIT on massively parallel computing architectures into a commercial product known as the Connection Machine. The company moved in 1984 from Waltham to Kendall Square in Cambridge, Massachusetts, close to the MIT AI Lab and Thinking Machines’ competitor Kendall Square Research. Other competitors included MasPar, which made a computer similar to the CM-2, and Meiko, whose CS-2 was similar to the CM-5. The company filed for bankruptcy in 1994; its hardware and parallel computing software divisions were acquired by Sun Microsystems. — Fornax Void, Vintage Computers

So, where’s your Crays?

Well, a number of the New Computer Museum’s advisers, contributors and friends do have a great deal of knowledge about the history of supercomputers, and some of them go so far as to collect extensive memorabilia as well as actual, even potentially functioning systems. Thus any real life physical location would certainly have at least a few interesting supercomputer related artifacts.

Screen shot of “Supercomputing Clubhouse” in prototype of New Computer Museum in SecondLife.